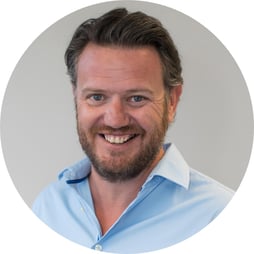 Last week, we put out our Agri Bank dashboard showing all the movements in the Agri Banks from portfolio size to market share.   You can find the article here.

In this article, we wanted to dive into a particular dataset that is very meaningful for farmers with their access to credit.

Put simply, this is a ratio (expressed as a percentage) of the banks “non performing” Agri loans over its total loans.

A non-performing loan is defined as all loans overdue or those that are overdue.

The actual definition can get quite complicated and differs between banks*, but broadly it’s a very good measure of the quality of the credit sitting in that respective bank’s portfolio.

This dataset is a “canary in the coal mine” in respect to changing bank credit appetite and ultimately the cost of that credit.

And we all know that when a market has more supply, price generally drops and vice versa.

When examining the data, it’s not just what level it is at right now, but the way the trend line is heading.
(* Rabo is a case in point, by design, they run a very high ratio of non-performing loans due to internal decisions- this does not mean that the quality of their lending book is worse – i.e they have a different approach for calculating.)

Also, NPL’s should not be confused with actual bank losses via write offs.   These are much lower again and are normally represented by “individual provisions”.

The graph below shows the major banks NPL’s over the last three years, with a non- weighted* average line through the middle.
(* non weighted meaning that its does not take into account the relative size of each bank’s Agri portfolio when calculating the average, however the trend line is still instructive as to what’s occurring) 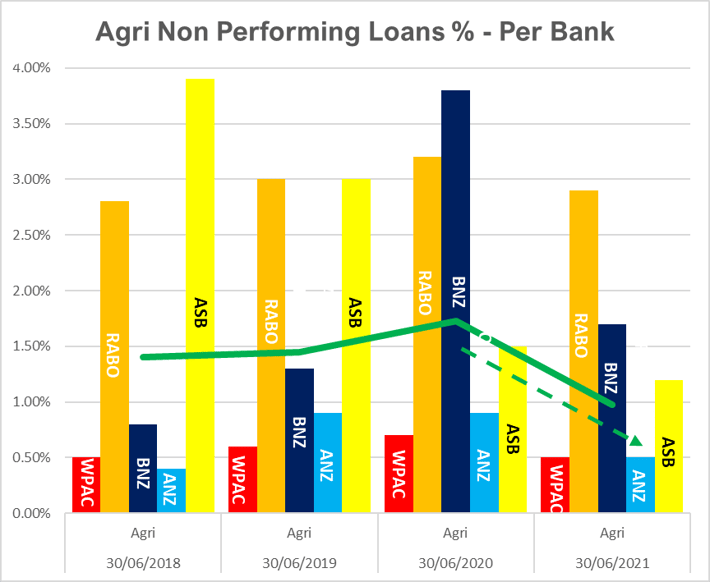 So, the first thing that should grab you is the steep drop in the last 12 months after two years of ongoing increases in NPL’s.

And that trendline is likely to keep dropping.

As NPL’s are largely a “look in the rear-view mirror” and as more farm financial statements continue to be made available and reviewed, those credit ratings (and hence ratios of non-performing loan) will improve further.

Also not reflected (yet), is the bottoming out of farm asset values – and in fact - the start of appreciating land values which we are only just starting to see now. This will have a further positive impact on NPL’s in the next upcoming period.

Noting that all banks do calculate their NPL’s differently, there are still some unmistakable observations at an individual bank level.

ANZ and Westpac are very low and in ANZ’s case, getting even lower.   This, alongside ANZ’s market share falling to their own lowest point ever is likely to be in behind their recent rejuvenation into the Agri Market.

ASB has also had a dramatic drop in their NPL’s, as has BNZ after increasing dramatically - with the latter now very much back in the market seeking new loans after an extended period out of it.

What’s more- the difference between total bank NPL’s (in all bank lending, not just Agri) is dropping.

These are now as close as they have been for a while. The below graph shows the movement of all bank NPL’s (Business, Agri, consumer and home loans) plotted against Agri NPL’s. 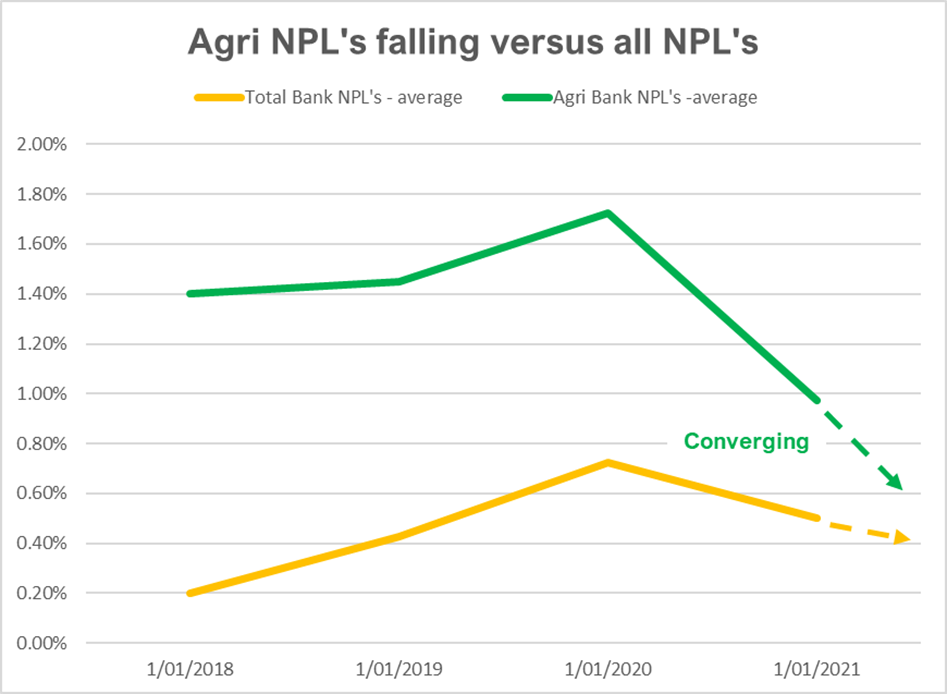 * This is a non-weighted average with Rabo excluded from data set given they are near 100% Agri.

Broadly, this means that the relative creditworthiness between Agri and other loans in the bank is improving.

NPL’s were slow to respond to the dairy downturn, with much of the downgrade activity occurring a long time after the event which suggests that the banks were generally slow at reflecting the increased risk in their books.

This enabled them to be supportive of farmers during the worst of the pinch, which was great, but resulted in significant regulatory oversight which ultimately delayed the recovery by stagnating access to capital and land prices.

This regulatory intervention also exposed the lack of ‘pricing for risk’ which has seen interest rate spreads for good vs bad go from 50pps to 300+bps meaning it is now more critical than ever to manage your risk ‘brand’ with your bank.

Overall, NPL’s are coming down without a corresponding level of debt write offs which leads us to conclude that the banks likely overshot the measurement of real risk.

The process of fixing this will lead to stronger returns on bank equity due to credit upgrades, and will likely drive appetite further to increase debt to the sector (which is what we are now seeing).

Some banks clearly managed this process better than others. It is fair to say that the later the NPL response, the more severe the downgrade, and the larger hit to the banks returns that was incurred.

Those banks are the ones that represented this with the largest margin increases during this period.

Those who kept a steady hand tended to subject their customers to less volatility.

So what does all of this mean for you as a borrower?

Well, the Agri book credit quality is improving and is set to improve further.

This means that banks have greater confidence in the quality of their existing credit, which generally means they start to feel more confident with providing more credit to the sector.

We’re starting to see the first change in this for over 2 years. 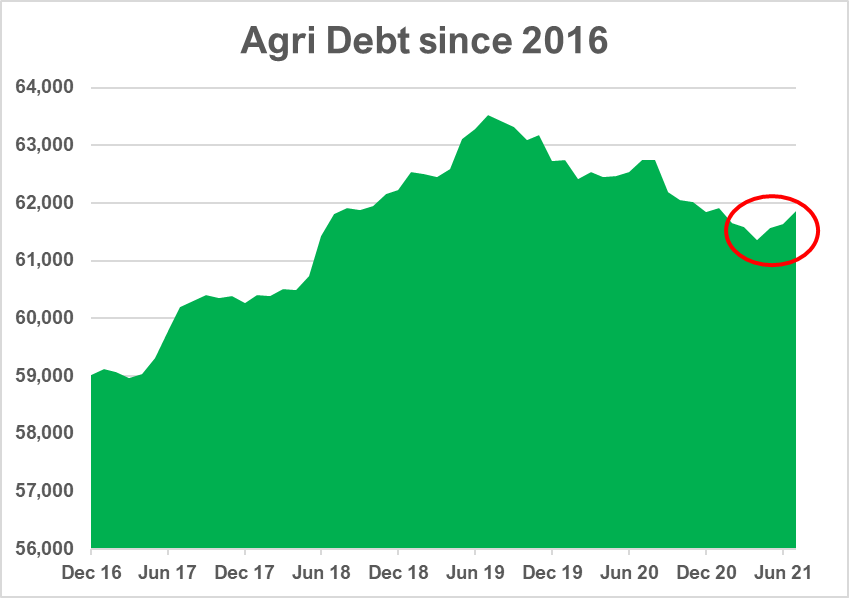 Additionally, more capital to the sector will mean asset values generally improve, although that credit growth needs to be sustained for much longer than what we’re seeing at present.

All good things we think.

But Banks will respond quicker next time so be prepared

Next time round, banks will be looking to respond to adversity faster, which may result in stronger credit intervention and restrictions on capital to higher risk farmers, so take the time to build additional resilience while you can.

But let’s take heart from the fact that debt is being repaid, leverage in the dairy sector (particularly) is reducing and balance sheets are rebuilding.

The improving ‘bankability’ of farmers we are now seeing will require banks to fight to earn the right to retain customers over the next few years, and we are looking forward to seeing how they innovate and differentiate themselves in this next period.

And one last thing – get your financial statements in for credit rating – You might benefit from a reduction in interest rate.

Your historical performance (and in particular the last three years) plays a significant part in your credit rating. FY 21 financial statements are generally going to look quite good.

When your banker has access to these, it will mean one more year of sustained good performance - and may result in a credit upgrade.

A credit upgrade gives you the right ammunition to ask for an improvement on the margin component of your interest rate.

As always, any questions please ask.

We’ve been operating for four years now and we’re right across New Zealand. For an introductory no cost chat, pick up the phone and talk directly to one of our specialists on 0800 NZAB 12.