Bank Margins in Agri are Set to Get Very Interesting

The interest cost that you pay as a farmer is one of the biggest costs on farm that you will face. It is right up there with your feed/grazing bill and your wage bill. Suffice to say, it should demand your attention.

We are in a great period, with farmers enjoying some of the lowest rates ever.

However, whilst those rates have dropped substantially over the last few years, the range of rates being offered to different farmers in the market is now incredibly wide versus history.

Farmer A could easily be paying double that of Farmer B.

Within that we are also seeing some significant change in the components that make up your interest rate and can see some interesting movements coming up as bank appetite shifts into the positive territory.

How you take advantage of that will require a specialised approach.

Firstly, lets start with what makes up your interest rate.

To illustrate, let’s narrow this discussion to only floating rate lending.

Your floating interest rate is made up of three things - The underlying “base indicator”, the banks’ “liquidity costs” and the banks “customer margin”. 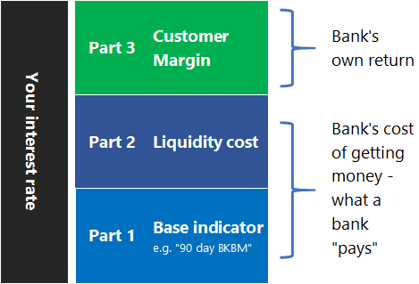 The “Base indicator” in this example is typically an inter-bank rate called “BKBM”, which is a weighted-average interest rate for unsecured lending between contributing New Zealand banks – it’s the universal and market published reference rate when it comes to all things borrowing.

On top of this are “bank liquidity costs” - these are best described as the costs on top of the base indicator that a bank must pay for all its funding. Over a decade ago, “liquidity costs” did not really exist - banks costs of borrowing equaled the BKBM rate. However, this all changed when banks were required to source more of their money domestically (or for longer tenure), adding cost.

And lastly, there is “customer margin” – this is the amount of revenue the bank makes out of its loan and is typically a mash up of a bank’s own expectations of return (driven by risk modelling and internal expectations for profit versus other sectors) versus market forces (cost of alternatives, fear of loss, appetite to acquire).

So simplifying this even further - Banks borrow money which is the aggregate of both the underlying benchmark rate and the liquidity cost (Sum of parts 1 and 2) and then they lend it out for profit (that’s part 3).

So, enough of the explainer, let’s get onto what’s been happening over the last 5 years or so.

Below is a simplified example of a slightly above average farmer (“slightly above average” in the sense of credit rating) who borrows $10 million -   and the comparative changes in each component of that farmers interest rate over the last 5 or so years. That farmer was paying 5% back then and is now being charged 3.2%.

(A word of caution here - there is a very big range in the different interest rate components between banks, so this is just a directional, yet real life example only).

Now this is great for the farmer as the drop-in interest rate means they are paying 36% less, although not great for the depositor as they’re getting a whole lot less now than ever before – but that’s the market and it is happening in all sectors.

However, when you strip out the rate into its core components, it gets a lot more interesting.

That big change in liquidity (the costs of the bank raising funds) has dropped significantly. And it hasn’t gone to the borrower – it’s gone to the bank.

Fast forward that to today - whilst interest rates have dropped substantially, and farmers are paying a whole lot less than they were, the bank, in this example is now making $250,000.

This is because depositor returns, (including that liquidity) have dropped at a much higher amount, which has allowed the bank to increase the amount of revenue they make off this particular loan. In this case, by 67%.

It’s important to note at this point, this article is not about arguing the relative merits or rationale of the changes that we’re observing here.

After all, banks were having to place a lot more of their capital against Agri Loans as RBNZ overlays started to bite.

These overlays reduced bank “Return on equity” and made Agri lending a less attractive place to lend versus other parts of the bank. Applying some real-life commercial sense to this - in a world where things get scarce (like Agri credit was), price generally goes up.

But one thing is really clear, whilst bank ROE may have been challenging for the banks, the top line cash earnings in Agri loans have increased significantly over this period.

What will be interesting, is what happens when that “scarcity” shifts – in other words - what will start happening when banks start competing for Agri loans again?

There is an awfully big buffer of potential margin to cut into.

Something to think about, isn’t it?

But here’s what you don’t do here.

Don’t go and race out to your bank and demand some sort of interest rate change.

Firstly, your business may not justify it. Your business may be risky or may not be presented that well.  The same goes for racing into the banking market to get another offer.

To be able to access the better end of interest rates in the market, you need to make sure your business is actually something that will be sought after by banks. That generally means good profit (and profit history), good strategy, sound asset base, good governance and alongside that, presenting all of that into a language that the bank understands and will compete for.

There is not a DIY option here.

DIY is great on the farm but not so flash for your bank. When it comes to talking to the banks, a bit of inside knowledge goes a long way.

So rather than knocking out an approach yourself, use NZAB.

We’re previous banking professionals with decades of rural banking experience, so we know how banks work. We are 100% on your side and can advise you on the right strategy to get the best possible outcome for you, your family and farm.

We’ve been operating for four years now and we’re right across New Zealand. For an introductory no cost chat, pick up the phone and talk directly to one of our specialists on 0800 NZAB 12.